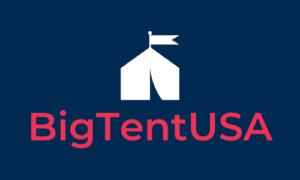 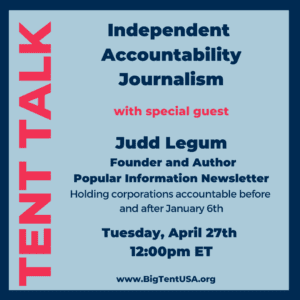 Join us for a discussion with Judd Legum about how corporations’ political reckoning began with one newsletter- Popular Information. He will also discuss corporate accountability before and after January 6th. As one of the early adopters of Substack as a media vehicle, Legum’s work demonstrates that newsletters can do far more than summarize the news. They can be a powerful vehicle to create change.

Popular Information is a newsletter by Judd Legum dedicated to independent accountability journalism. The newsletter has had an impact on people’s lives by consistently holding powerful people and institutions accountable for their actions. Last March, as the coronavirus pandemic emerged, Popular Information reported that Darden — which operates the Olive Garden and other large restaurant chains — did not provide paid sick leave for its employees, except in a few states where it is required by law. The reporting for that edition involved talking with dozens of Darden employees, in restaurants, on the phone, and online. About 10 hours after the piece published, Darden announced it would provide paid sick leave to all its hourly restaurant employees. The change improved working conditions for 175,000 workers. Similar reporting in Popular Information on Kroger, Spectrum, and Petsmart, grounded in interviews with employees and internal documents, resulted in meaningful changes for workers at those companies.

The newsletter has also reported extensively on online misinformation, with a focus on Facebook. A report in Popular Information in 2020 resulted in Facebook removing over 1,000 Trump campaign ads for violating the company’s policy on census misinformation.

Popular Information’s reporting has been cited in the New York Times, the Washington Post, Bloomberg, the Associated Press, The New Yorker, NBC News, Vanity Fair, BuzzFeed, and many other national and local outlets.

Legum was born in Annapolis, Maryland and earned a B.A. in Public Policy analysis from Pomona College and a Juris Doctor from Georgetown University Law Center in 2003. After graduating from law school, Legum founded ThinkProgress in 2005, running it for two years before leaving in 2007 to join Hillary Clinton’s presidential campaign as research director. Following the 2008 campaign, he practiced law in Maryland before returning to ThinkProgress in 2011, and became the site’s editor-in-chief in May 2012.

In 2018, Legum announced he was leaving ThinkProgress to develop an independent newsletter, to be published through Substack. Legum joins Matt Taibbi and Daniel Lavery as early participants in the company’s publishing model. Legum’s newsletter is Substack’s first politically-focused publication. It launched July 23, 2018.